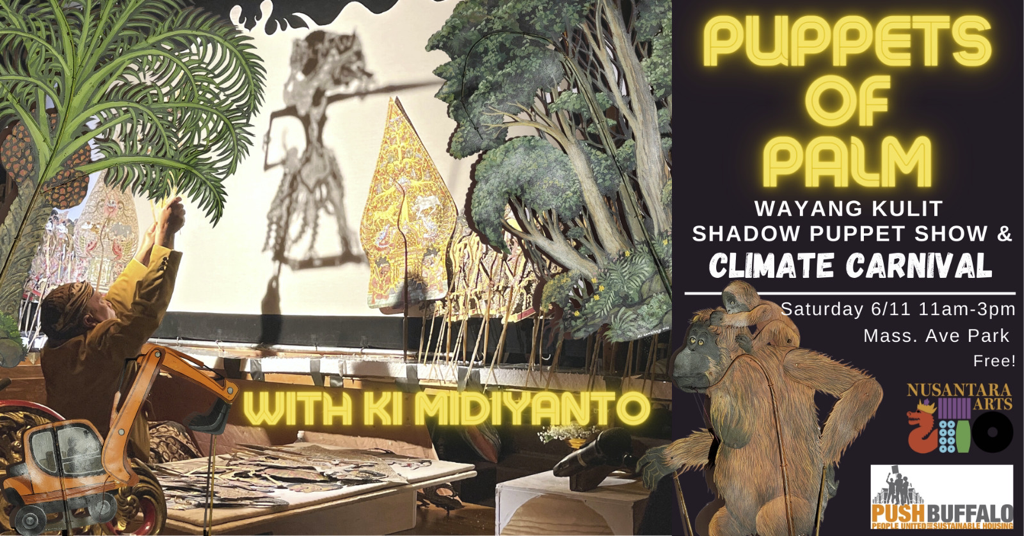 Nusantara Arts performance troupe weaves an epic and moving tale of rainforest deforestation using the enchanting gamelan music of Indonesia and the inspiring shadow puppets of wayang kulit theatre. Characters from ancient wayang stories mix with new puppet creations in an adventure for the whole family to enjoy and learn from.

Renowned Central Javanese musician and puppet master (dhalang) Ki Midiyanto, teaches and performs as Lecturer and Co-Director of Gamelan Sari Raras at University of California, Berkeley, and also as guest artist and instructor throughout the U.S., Indonesia, and internationally.

Born in Wonogiri, a rural district in the southern part of Central Java, Midiyanto comes from a family of many generations of gamelan musicians and puppeteers. Midiyanto was an autodidact learning and performing his craft at a young age. He attended the Sekolah Menegah Karawitan Indonesia (Indonesian Academy of Musical Arts) and Sekolah Tinggi Seni Indonesia, now known as Institut Seni Indonesia (Indonesian Academy of Musical Arts) in Surakarta before going abroad to teach and perform.

Midiyanto co-founded the Gamelan Sari Raras performing ensemble at the Department of Music, UC Berkeley in 1988 with Professor Ben Brinner, and first taught gamelan at Berkeley from 1988 to 1991.

In 1997 Midiyanto completed his Master of Arts in Education at Lewis and Clark in Portland, Oregon. He served as gamelan director at the college for 10 years until 2002, and has continued as visiting director since then. He returned to UC Berkeley in 2004, where he now teaches very popular student gamelan classes and the Sari Raras community gamelan ensemble.

Over the last 30 years Midiyanto has taught and performed extensively in Indonesia, the U.S., Singapore, New Zealand, Australia, and Canada.  He has been featured in several documentary films and directed the gamelan for the Shadow Music of Java CD recorded at the Smithsonian  in Washington, D.C. during a two-month residency in 1991.
​
Midiyanto is acclaimed for his master artistry combined with his ability to foster Western student and audience appreciation of the rich and uniquely Javanese traditions of gamelan and wayang kulit (shadow puppetry).